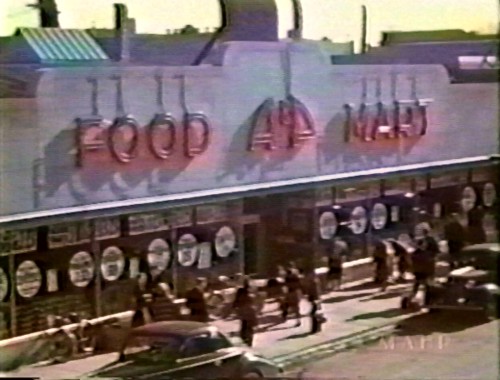 Chicago in the 1940s (29:50): Great footage of the Chicagoland area, originally released in 1999. Begins with a rare film clip of the Pageantry Opening of the Chicago Subway, October 16, 1943. This b&w footage shows you Michigan Avenue, watch the parade as they set-up in Chicago under the El...trolleys in the background as horse and buggy leads the parade. Great floats and marching bands right past downtown Walgreen's and Marshall Fields and the Telenews Theater that was set up during the World War II era. Plus, you'll have a tour of Chicago Park near Buckingham Fountain and the museums. Then, some rare color footage...the 1940s cars and people and styles and city streets. And, don't miss the billboard company films showing off the billboard advertising and how they pasted them up...with the glue bucket and the masterful billboard hangers as they worked in the sky. Watch the clicker guy counting all the people passing these billboards to show the high-traffic volume for their sales. Night scenes of downtown Chicago and the Paradise Theater and Howard Bowl. Then, more b&w parade footage in South Chicago at 87th Street and Commercial Avenue in the 1940s! See the opening ceremony, south side's Fire Department, local neighborhoods, a tour down Cal Sag Channel and more! This first chapter ALONE is worth the price of the DVD!

Skid Row 1941 (08:00): Two reporters go under cover on "skid row" to uncover how life is with the underprivileged there. Great street scenes, narrated (dramatization).

Chicagoland Sports (06:26): Chicago Bears in 1949 at Wrigley Field...Chicago Cubs b&w footage as they beat Cincinnati in a grand upset...great footage!

Proudly We Hail (26:26): Late 40s production by Standard Oil Company. Speaks of Americans, but filmed and centralized in Chicago. America (Chicago) the melting pot...we're all just people...treat each other well...a feel-good American film!