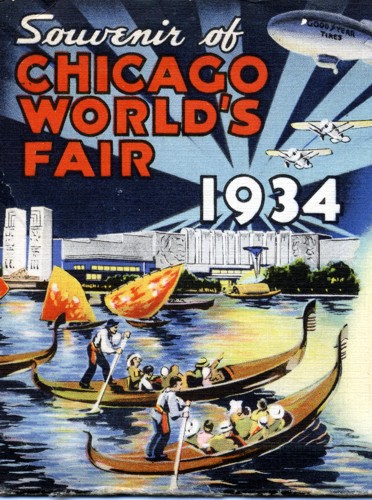 1. Chicago World's Fair (30:25): A rare look at all the exhibits in the fair and footage from our archives..all of the Century of Progress main tour, all in black and white, all a must see for Chicago lovers.

3. Hello Chicago! (1:48): You can find the original Hello Chicago footage on the 1930s DVD. But this clip was hand-picked for this World's Fair DVD. You'll see footage from BEFORE the fair even opened!

5. The Fair Opening 1933 (06:38): A grand gala at Chicago's Soldier Field held the opening ceremonies for the fair. Many beauty queens were chosen to sit court for this event, the Fair Queen and her fair court...much like a pageant. And, don't miss Miss Sally Rand doing her fan-dance...NAKED! (Seriously. Naked.)

6. Scrappy Cartoon: A World's Affair (03:40): RARE black & white cartoon of Little Scrappy (and the rest of the world!) going to the Chicago World's Fair! The sweetest introduction by two little guys with infant voices...then go on a tour with Scrappy! Animated.

7. Wonder Bread Home Movies (14:30): This footage is the only we've found that a company filmed their exhibit thoroughly. Starts at Lake Shore Drive & 23rd Street, even though it's not part of their exhibit, and takes you to the Wonder Bread Exhibit for a nice little tour. Their exhibit featured a dining area, an on-site bakery and more!

1. FORD MOTOR Co. Shows The Chicago World's Fair (33:35): Produced by Ford shows all the exhibits and, of course, promotes the Ford Manufacturer of Automobiles. Also featured are some companies of the time providing parts to Ford. A rare look at all the exhibits in the fair with footage from our archives.

2. 1934 Night Footage Tour (6:50): Sky tour from the air provides a great night scene, as many of the fair exhibits are well lit. You get to see the entire fair layout! (counter present on film)

3. Century Tour (12:48): 1933 promotional film, and great stock footage of the fair and administrative buildings at the north entrance. See the Avenue of Flags, the Hall of Science, the Golden Temple of Jehol, the Sinclair Exhibit and more! See a live radio broadcast as it happens. Mechanical dinosaurs, high divers, the Travel and Transport Building, Pullman Cars, and the list goes on and on.

4. Chicago Fair Home MOVIES (5:22): A view of the fair as a tourist! Rare home movie footage of the fair.

6. South Africa, Egypt, Europe Tour 1934 (21:40): The story goes that a pair of brothers had visited the fair (One Last Wish Before He Dies), and decided to see the world for themselves! This film, shot in 1934 takes you to the Indian Ocean, then tour Colombo Ceylon, Cairo, Rome, Venice, Italy...and much more as the tourists take you along.